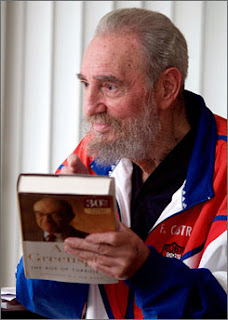 Fidel Castro looked alert and healthier during an hour-long interview taped and aired on cuban television Friday, responding to rumors of his death with a defiant "here I am".
In the first video of the ailing 81-year-old revolutionary seen in more than three months, a pale Castro stayed seated the entire time, spoke slowly and softly and didn't always look the interviewer in the eye. But he appeared to be thinking clearly.
The Cuban leader said the thought the Bush administration could go to war with Iran and bemoaned the high cost of the war in Iraq, but provided no new details about his health, except to say, "well, here I am".


cuban leader Fidel castro speaks during an interview while holding a book written by former U.S.Federal Reserve chairman Alan Greenspan. Castro gave his first television interview in more than three months on Friday following speculation in recent weeks that he might be on his death bed.
at 3:14 PM

Chocolate is smooth and creamy. But it's really made from beans! Cacao beans are roasted, then made into a powder. this is mixed with milk, sugar and flavouring to make the candy. Cacao plants grow in the tropics. The countries of Ghana, the Ivory Coast and Brazil are the world's largest producers, Natives of Mexico made the first chocolate, and it was introduced to Europe about 1500. The chocolate bar was made by the Swiss in 1876. Cocoa is also made from cacao beans.
at 4:24 PM

Email ThisBlogThis!Share to TwitterShare to FacebookShare to Pinterest
Labels: General

Sambhavi has had a caesarean section. she is feeding the baby comfortably but still feels some pain over the incision. She has always been an active person and wants to return to her normal routine as soon as possible. After reached home she take bathe every day. Let the water run over the suture line. she can gently apply soap over the wound. she washed her hair once a week. She can start climbing up and down stairs two weeks after her surgery.
Sambhavi have some Reasons to call Doctor :

Email ThisBlogThis!Share to TwitterShare to FacebookShare to Pinterest
Labels: Technology

Robot teacher calls roll, smiles and scolds, drawing laughter from students with her eerily lifelike face. But the Japanese developer says it is not just about to replace human instructor. Unlike more mechanical looking robots like Honda's Asimo, the robot teacher, called saya, can express six basic emotions-surprise, fear, disgust, anger, happiness, sadness-because its rubber skin is being pulled from the back with motors and writing around the eyes and the mouth.

In a demonstration, the robot's mouth popped open, its eyes widened and eyebrows arched to appear surprised.
at 6:43 PM